For the first two weeks in January I worked tirelessly to finish my electronic mural, which had been stewing around in my mind for months. I had tested the circuit on paper successfully (read about it here) and started ambitiously a mere two weeks before I was leaving the country for a long trip. My plan was to use Chibitronics circuit stickers and an Electroninks circuit scribe pen, with a back up of Bare Conductive paint if it didn’t work well on the wall. 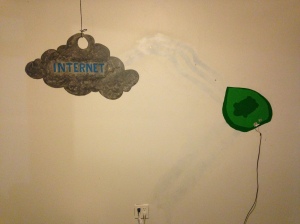 In the coming days I will post more extensively about the process, including the many, many lessons I learned about painting and electronics, but needlessly to say I hit a number of large road bumps, spent inordinately more time on it than I had planned, completely redid the logic circuitry once, and finished it the morning before I left. Success!

The goal of the mural was simple: Light up a series of LEDs, indicating the ascension of information to the internet, whenever people made noise in the conference room. I am extraordinarily proud of how it turned out: